John M. Browning is a legend in the firearms industry. But the one thing people don’t know is that Browning contributed significantly to the invention of shotguns. As a matter of fact, some of his greatest achievements are the improvements he made on shotguns. To date, Brownings Arms Company is one of the leading designers of shotguns, and the Browning BPS is just one of the many incredible weapons that this company makes.

So, why add Browning BPS shotgun to your collection? Well, this shotgun is one of the most reliable ones; it has a good finish that makes it resistant to water and abrasion. Plus, it has an ergonomic design that gives you a good hold even in inclement weather.

If you’re new to this magical weapon, here is a detailed Browning BPS review.

Things to Consider before Buying a Shotgun

The way pro-gun activists tell it, you’d think that you can just walk into a store, pay a few bucks and walk out with a loaded firearm ready for action. The truth is, however, purchasing a shotgun is not as easy. You should be well-informed and, more importantly, have the right documents. Here are a few things to keep in mind:

The gun laws in various states are as different as night and day. However, there are a couple of rules that apply to every state. For one, potential gun owners ought to have a valid state ID or driver’s license.

Two, they should fill out Form 4473, which is issued by the Bureau of Alcohol, Tobacco, Firearms, and Explosives (BATFE). This form explains the legal requirements for owning a firearm. For instance, you cannot buy a firearm if you are an illegal alien, felon, junky or mentally ill.

On the same note, it’s illegal to buy a gun on behalf of someone else. Buying a shotgun is not like buying a ticket to an R-rated film for your teenage brother; it’s a much bigger crime.

Some firearms are designed to perform a particular task. The shotgun used by military personnel is not the same one used by civilians for personal protection. In this case, the Browning BPS shotgun is best suited for hunting. This shotgun is well-balanced, making it a pleasure to shoot.

Although some pump action type shotguns are advertised as being versatile, most of them area case of “a jack-of-all-trades but a master of none”. So, if you want to find a good shotgun, first determine how you want to use it then look for one tailored for that function.

Overview of the Browning BPS 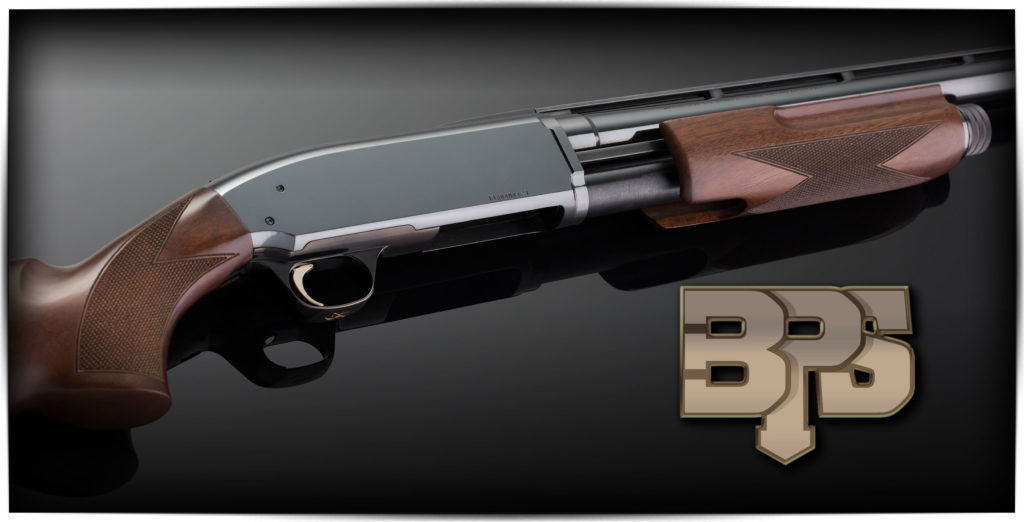 Most of Browning’s firearms come in a variety of configurations, and their BPS shotgun is no exception. The two main variants are BPS Stalker and Hunter shotguns.

The BPS Stalker is another tough contender in the category of pump-action shotguns. It boasts a composite stock with matte black coating. It also has a back-bored barrel, which means that its diameter has been increased beyond standard specifications. The larger diameter of the bore enhances its performance significantly.

Overall, the Browning BPS line of shotguns has been built with hunters in mind. The features explained in the next section make them very suitable for hunting both small and big game.

As we mentioned earlier, the most incredible feature of the Browning BPS shotgun is its durability. The forged steel receiver and sturdy stock contribute to the resilience of this shotgun. Also, the shotgun’s double slide bars are pretty tough. So, you don’t have to worry about them bending or twisting—and this gives you better performance of the gun.

Apart from its sturdy build, there’s another feature that sets the Browning BPS apart from the crowd, and one that I really like. I’m referring to its ability to hold all kinds of ammo. Why I love this feature? It allows me to hunt a different game. Whether I want to hunt rabbits or waterfowl, I can use this shotgun with a variety of cartridges.

Browning BPS is a very versatile shotgun. One particular aspect that makes it versatile is thumb safety. Mounted on the top rear section of the receiver, the thumb safety is easy to access for both right-handed and left-handed shooters.

Another important thing to note about the Browning BPS is that it’s a bottom eject shotgun. This means that it sends fired rounds downward, out of your line of sight. The bottom-eject mechanism is also beneficial in that if you’re standing side by side to someone, then you won’t be sending the fired rounds in his direction.

Furthermore, this shotgun is fitted with the Invector-Plus choke system, which has a far superior design than the choke systems in traditional shotguns. This feature works in tandem with Vector Pro and back-boring to deliver consistent and dense patterns.

What to Keep in Mind

The Browning Invector provides just the right amount of constriction that you’d need for different shooting situations. That said, there are a couple of points you need to keep in mind about this choke system:

Performance-wise, Browning BPS is user-friendly and has a very smooth action. Once you’ve loaded the chamber, all that’s left to do is to fire the gun. To shoot, push the thumb safety forward so that it’s in ‘fire’ position. With some BPS models, there’s a red warning dot that lights up to indicate this action. When you finish shooting, remember to put the safety in the ‘on safe’ position.

How can one maintain Browning BPS shotgun?

If you’d like to pass on your Browning BPS to your kids someday, then one thing you’ll want to do is to keep it in good condition. Therefore, you should lubricate the metal parts after a few hunts or sessions at the clay ranges. The reason we recommend lubricating regularly is that some older Browning models are notorious for having chambers that rust very easily.

At times, you should also consider adding a small drop of gun oil inside the receiver track. Doing so prevents excess friction while also guaranteeing a smooth operation.

Are the Invector, Invector Plus or Invector-DS choke tubes interchangeable?

No, they are not. The standard Invector choke tubes were the original version. Later, Browning invented the Invector Plus and Invector-DS in that order.

When shopping for Browning BPS, it would be a good idea to confirm the type of choke installed in the specific model you plan to buy. You can do this by checking the details engraved in the barrel and the choke tube. Alternatively, just visit browning.com, look for your BPS shotgun and click the ‘Features’ section.

Can I have extra barrels made for my shotgun?

Yes, Browning offers additional barrels for their BPS line of shotguns and a few others. These include the Maxus, Gold 10 Gauge, Gold 12 and 20 gauge, Silver and A5. Just visit your local Browning dealer or order online from their site.

Can I buy BPS shotgun directly from Browning?

According to federal law, you can only buy a new firearm from a dealer, who should have a valid Federal Firearms License (FFL). As a buyer, you also need to comply with the regulations stipulated in Form 4473.

Can I use any Browning BPS shotgun for hunting, sporting clays, trap, and skeet?

However, you will get a better outcome when you use a shotgun designed for a particular activity. There are specific features integrated into the different models of BPS shotguns that benefit each of these sports.

Does Browning offer any cleaning supplies for shotguns?

Yes, they do. You can buy their gun cleaning products separately or as a package that contains four main products—carbon remover, bore polish, gun oil, and solvent or degreaser. You can get these from your local Browning dealer or by contacting customer service.

Browning BPS is a versatile shotgun that is a pleasure to shoot. The durability of this firearm remains unmatched. So, whether you go for the Hunter or Stalker model, you’re guaranteed of getting an effective hunting companion by your side. Happy hunting!