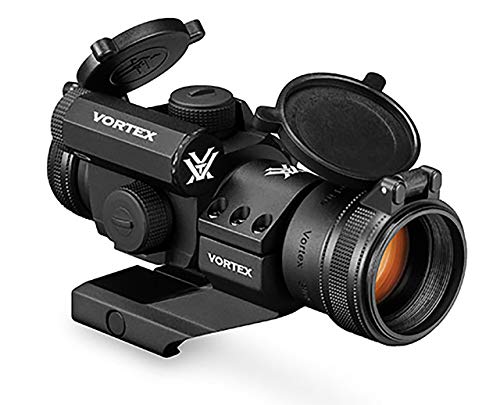 Has the shooting bug recently bitten you and are you new to the shooting world? This Vortex Strikefire review will detail exactly why the Vortex Optics SF-RG-501 Strikefire II Red Dot Sight is good for beginner shooters, but is also a great choice for intermediate shooters with a little bit more experience under their belts.

Priced in the upper-echelons of the budget-price range for red-dot sights, the 1.1 pound weight of this Vortex Optics SF-RG-5-1 Strikefire II undoubtedly makes it one of the heavier sighting devices around, but if you’re a beginner this is great because as your shooting advances, you’re likely to only use lighter sights of around 12-13 ounces. It’s extremely easy to set up and you’ll be up-and-running in no time, but depending on which firearm you’re mounting it on, the rails you’ll use can bring its total weight right down to around 7.5 ounces. Again, this isn’t something you’d be too worried about as a beginner, but this information comes in handy if you’re a little bit more of an experienced or regular shooter.

Is this really the best scope for beginners and intermediate shooters? The best way to answer what is an inevitable question for advancing beginners is by first looking at your firearm collection, which will no doubt be a growing one. If you’re going to switch regular-use firearms once you make the leap from beginner to intermediate or advanced shooter, then yes, this would probably be the best first scope for you. An example of this might be that which entails your “beginner gun” being something like a Sig Sauer 556 Swat Patrol, with perhaps an AR-15 forming part of your growing arsenal once you graduate to being an intermediate or expert shooter. Otherwise the Vortex Optics Sparc II 2 MOA Red Dot Sight (SPC-402), from the same manufacturer will perhaps be a better alternative if you’re just going to mount one firearm and persist with it as you advance your shooting levels.

The alternative is purely a suggested option as a result of the mounting systems used — one is a bit quicker and easier to switch between firearms (Sparc II) while things can get a bit complicated with this Strikefire (it requires a different co-witness mount if you don’t want the front-sight to station about a third of the way along the AR15, instead of dead at the center). That would account for another trip to the gun shop and even then, you’d have to know exactly which co-witness mount you’re looking for, although you could probably ask the manufacturers and tell them exactly what you aim to achieve.

It makes for quite a natural alternative in comparing the Srikefire with a Sparc II, but when it comes to the type of optic you’re after, it’s purely a matter of comparing the Sparc II with the Strikefire based on your personal requirements. Otherwise the Strikefire’s battery life will give you about half a year depending on the frequency with which you use it (and the intensity). This sight is one of very few which offer a different color reticle, so you’re not only stuck with a red-dot — you can go green as well, which is useful in what is probably a bizarre occurrence when you have a bright reflective red light-source behind you. The dot is of a good quality and is very easy to adjust, witnessing perfectly in conjunction with iron sights and also zeroing pretty much as soon as you mount it.

It’s a pretty solid and firm sight in deployment, capable of holding up nicely when used with firearms such as a .308 Colt.

The Strikefire offers no magnification however, as with many red-dots (because they’re not really made to magnify) and you can’t remove the caps. It’s also not waterproof, so you’re limited to using it in dry weather.

Check out our list of the best AR 15 Scope Reviews and this article on Sig Sauer Romeo 5 to see how this Vortex compares.

If you have a handgun, you might want to consider the Viper (read about it here), or Venom (click here). 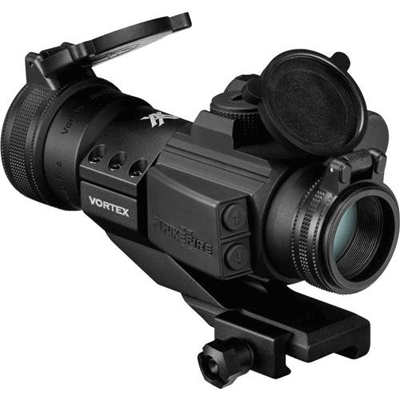 The gist of this Vortex Strikefire review was to shine a spotlight on exactly why this is a great red-dot sight for beginner shooters, but as its many features and in-deployment functions were explored, it became increasingly apparent that the intermediate or even experienced shooter will find it very useful. This is the one sight in your arsenal you’d use if you were in a situation that requires you to deploy your firearm as quickly as you can as it offers lightning fast target-acquisition.