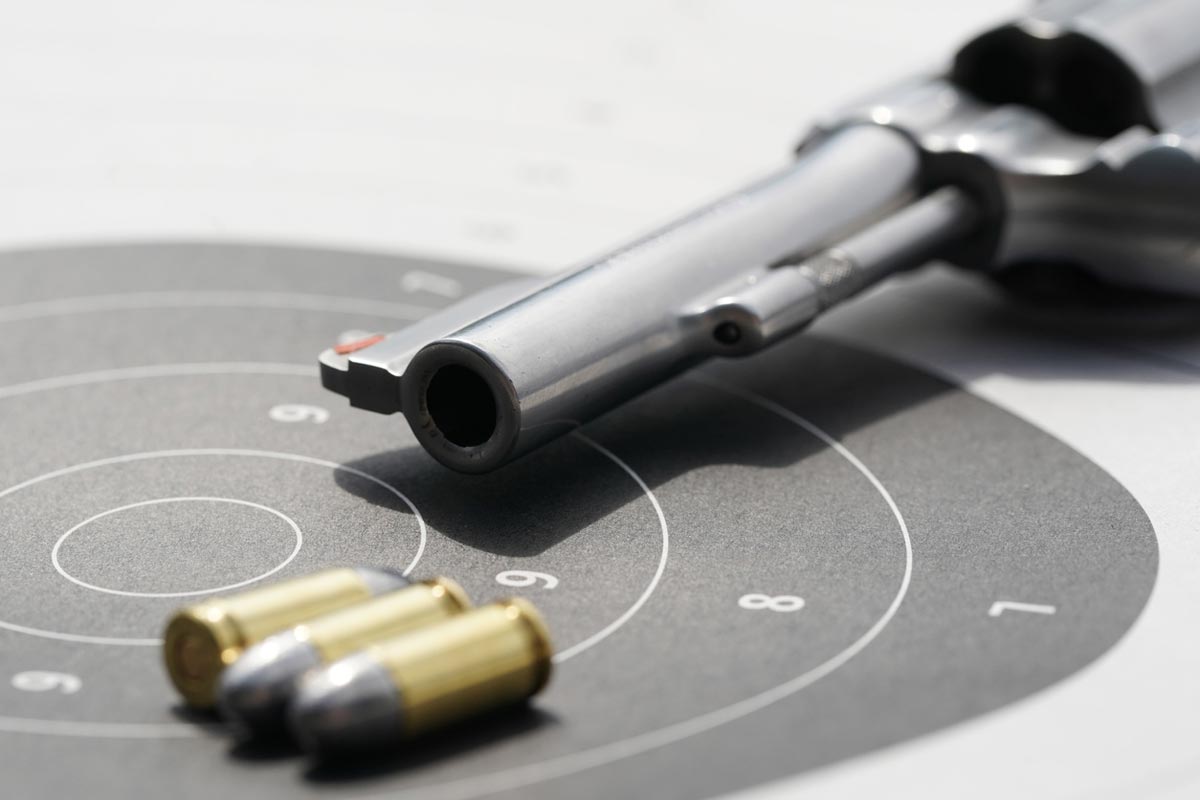 Since its conception in 2010, the Chiappa Rhino .357 Magnum Revolver has been keeping the gun world talking about its design and function. Some people really do love this gun because it’s a little bit different than the more traditional guns on the market. However, other people don’t like it because it’s different from the traditional guns on the market. See the problem here?

What makes this gun a rebel without much of a cause is that it ventures outside of the norm, which a lot of gun lovers aren’t really excited about. But the true question this Chiappa Rhino review is going to answer is whether this .357 magnum revolver is worthy or a flop. Before dropping a load on this revolver, hear us out.

Buying the Chiappa Rhino .357 Magnum Revolver needs some digging. Jumping in with both feet before knowing what you’re getting yourself into is honestly stupid. I’m not here to sugar coat the facts for you because the truth is, I want you to get the best product for your hard-earned money.

The Chiappa Rhino has some good qualities (although not innovative) and some seriously questionable features. Whenever a company chooses to put a product out into the world, the quality should be exceptional. But, honestly, the Chiappa Rhino .357 Magnum Revolver leaves something to be desired.

The ideal customer for the Chiappa Rhino .357 Magnum Revolver is someone who likes novelty items and is intrigued by unique looks, such as the stylish cylinder, moon clips, muzzle, and firing pin. It isn’t necessarily the best revolver for practical use, but it would work in almost any situation. Buying the Chiappa Rhino isn’t wrong, but it might not be right for your specific needs.

While this gun can be concealed pretty easily and could be used in everyday situations, the truth is, it might not be the best option for everyone. It’s a futuristic-style gun that will leave any gun lover with something worth showing off from time to time. Find the right user who has the time to test it out in the range and find the sweet spot and the Chiappa Rhino could be a good option. 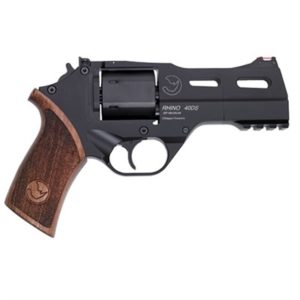 If there was one thing that the Chiappa Rhino Revolver aimed to do it was to be more comfortable and have better recoil mitigation than the competition. And, honestly, that’s what the Rhino does. As the first of its kind, the Chiappa .357 Magnum Revolver gives users exactly what Chiappa was after.

With an aluminum and steel construction, the Chiappa Revolver is lighter than most other steel revolvers (but not by much). The frame is also smaller with only a 3-inch barrel that holds a pretty standard 6-round capacity. In order to achieve the recoil mitigation, Chiappa was after the Rhino fires from the bottom of the chamber. For smaller framed users, this revolver is easy to use. Unfortunately, it is not the best option for first-time gun owners. There are some practice and time spent at the gun range that will be needed.

Customizing your Chiappa Revolver isn’t going to be as easy as it is with other revolvers. The options for replacement parts are very limited, which means finding customized parts is almost impossible.

With an aluminum and steel construction, the Chiappa Rhino is lightweight and easy to hold. I like the lightweight options for any revolver because they’re easy to conceal and easy to hold. Just because it’s easy to hold doesn’t mean that everyone should hold it, though. The lightweight construction means that if a smaller person wanted to use it, they could. But be aware that any new user for the Rhino will probably need a lot of training and practice. It is also smaller in frame with a 3-inch barrel and 6-round capacity. If it has power, it doesn’t matter how heavy it is, right?

When Chiappa decided to create the .357 Magnum Revolver, their first goal was to create something that would have an easier recoil. I like power in my revolvers, but I also like being able to use it repeatedly without feeling like I’ve been in an intense arm wrestling competition. The unique recoil mitigation system is made possible because of the shot fires from the bottom of the chamber. It shoots the recoil back into your hand rather into your arms/shoulders. You still feel it, but you just feel it in a different way. Given the desires of Chiappa, I’d say the hit the nail on the head with this feature. They shot, they aimed, and they fired on this one.

As with the recoil system, the cylinder release is different in the Chiappa Rhino. When you push down on a latch with your thumb, a hexagonal cylinder opens. This leaves you with an ejector rod that works most likely how you expect it to work. While this feature does take a little getting used to, it’s not something that requires too much time. With the cylinder release set up this way, you can still reload quickly, which is often a concern for gun users.

Chiappa Rhino .357 Magnum Revolver gives you a target trigger that’s square and broad. These are two very unique trigger choices, but the Rhino doesn’t seem to follow many of the traditional rules you’d think a revolver would anyway. It is marketed as a self-defense revolver, which makes the target trigger a unique choice. It’s not a bad thing, but it’s not something you’d expect to see. The thing about this type of trigger is it can take a toll on the firing finger when it’s used in longer sessions. It’s probably not your all-day shooting range option, but it’d be fun for a little spin around the block every now and then.

If you are looking for a gun that doesn’t look like anything you’ve ever seen before, congratulations. You found it. The Chiappa Rhino .357 revolver is one of those guns that you’ll be showing off to anyone who’ll look. There’s something to say about the mesh of two styles and interesting components the Rhino brings to the table. And while I value function over aesthetics any day, the Rhino doesn’t necessarily falter in the functionality department. This means that the unique wooden-looking handle mixed with the aluminum and steel barrel create a look like goes somewhere between modern and traditional nicely. 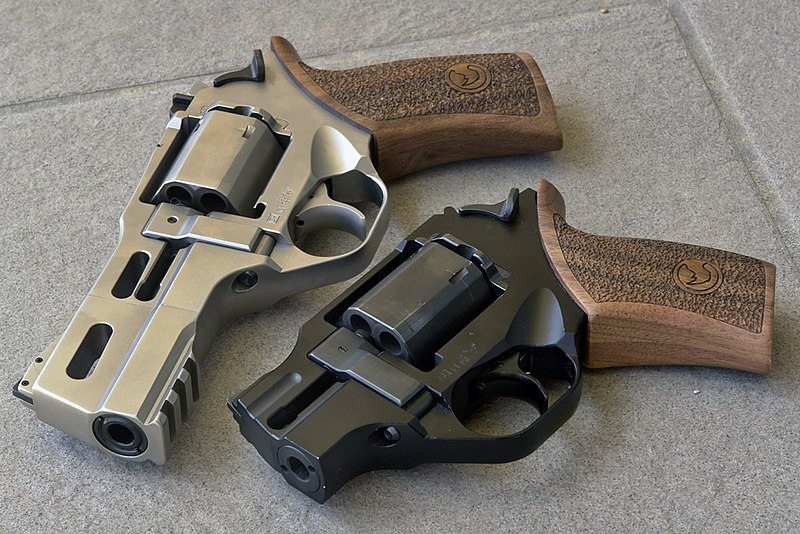 Pros and Cons of the Chiappa Rhino

Like I’ve said, the recoil on this revolver is one that is unlike anything I’ve ever seen. It’s not that the recoil is undetected completely, but it is reduced. For a revolver, this is a good feature to have. I’d rather feel like I still have my arms after a shooting session than feel like I’ve been lifting weights for three hours straight. With the shots firing from the bottom of the chamber, the recoil shoots back into the hand rather than into the arm.

The 3-inch barrel allows for a 6-round capacity hold. 6 rounds is a pretty good size capacity for any revolver. But what makes it a desired feature for a revolver is that it keeps the frame on the small side. This makes concealment and handling easier for all types of users. If using good revolver ammo you will not sacrifice any power because of this.

The handle has been noted by a lot of Chiappa Rhino users as easy to handle.

Sometimes a revolver can be so large that smaller hands can’t grip the handle good enough. This can make a user feel less confident and more unsure of themselves when using the gun. In the Chiappa Rhino’s case, users can grip it easily and feel confident they can control it.

The aluminum and steel construction makes this revolver lightweight and easy to hold.

This could make use easier for all types of users. Chiappa got the construction right on this revolver for sure. I know that holding a revolver that weighs a ton can be overwhelming, but if it is lightweight like the Chiappa, using it won’t seem like such a problem for so many users.

Aftermarket parts are not available or are very limited for the Chiappa Rhino .357

Magnum Revolver. I like to customize my firearms just as much as the next guy, but it’s

not possible with this one yet. Chiappa has made it almost impossible to find parts that will allow a person to customize it to meet their specific needs. Therefore, if you want something that works for you and not the other way around, Chiappa is not for you. It definitely would be a cause for pause for me.

Firearms, including revolvers, shouldn’t necessarily be cheap, but they also don’t have to break the bank. The Chiappa Rhino Revolver is not the most economically-friendly option with a price tag of at least $1100 to $1500.

It seems that most people who have tried the Chiappa Rhino have some questions when it comes to the ergonomics of the gun itself as well as some functionality concerns. The gun gets really hot when it’s in use for longer periods of time and it’s got some trigger issues that raise red flags.

But the one thing that continues to pop up across the board is that it has potential. People are not discrediting the uniqueness of the Chiappa Rhino .357 Magnum Revolver. They’re just more concerned about some of the functionality that it brings to the table. A lot of users said that if Chiappa can get their act together and fix some issues, it would be a great gun overall.

What I Like About the Chiappa Rhino .357 Magnum Revolver

FAQs about the Chiappa Rhino Revolver

Many of the users who have taken apart their revolver to clean it have reported that it was a disaster. The cleaning part was not hard but the putting back together was difficult.

Yes, this is a great option for a concealed carry firearm. It has a smaller frame and a 3-inch barrel, which makes it shorter in length than many of its competitors. The aluminum alloy and steel construction give the gun a lightweight feel, as well, making it easy to conceal and carry.

If you were wondering whether or not the Chiappa Rhino .357 Magnum Revolver was worthy of all the hype it’s been receiving, I hope you got your answer in this Chiappa Rhino review. Is it the perfect specimen of a gun? Not yet. Is it a great contender for the future? Absolutely.

The Rhino will get the job done without a doubt, but it might take a few trial and errors to get there. Sometimes, you don’t have that kind of time and sometimes you do.

If you want a revolver that saves you in the recoil department, is lightweight, is easy to grip, and has a one-of-a-kind look, the Chiappa Rhino .357 Magnum Revolver could be a good choice. But if you’re looking for perfection, it’s not quite there yet.

Do you prefer .22 pistols? Click here to take a peek at our best picks.