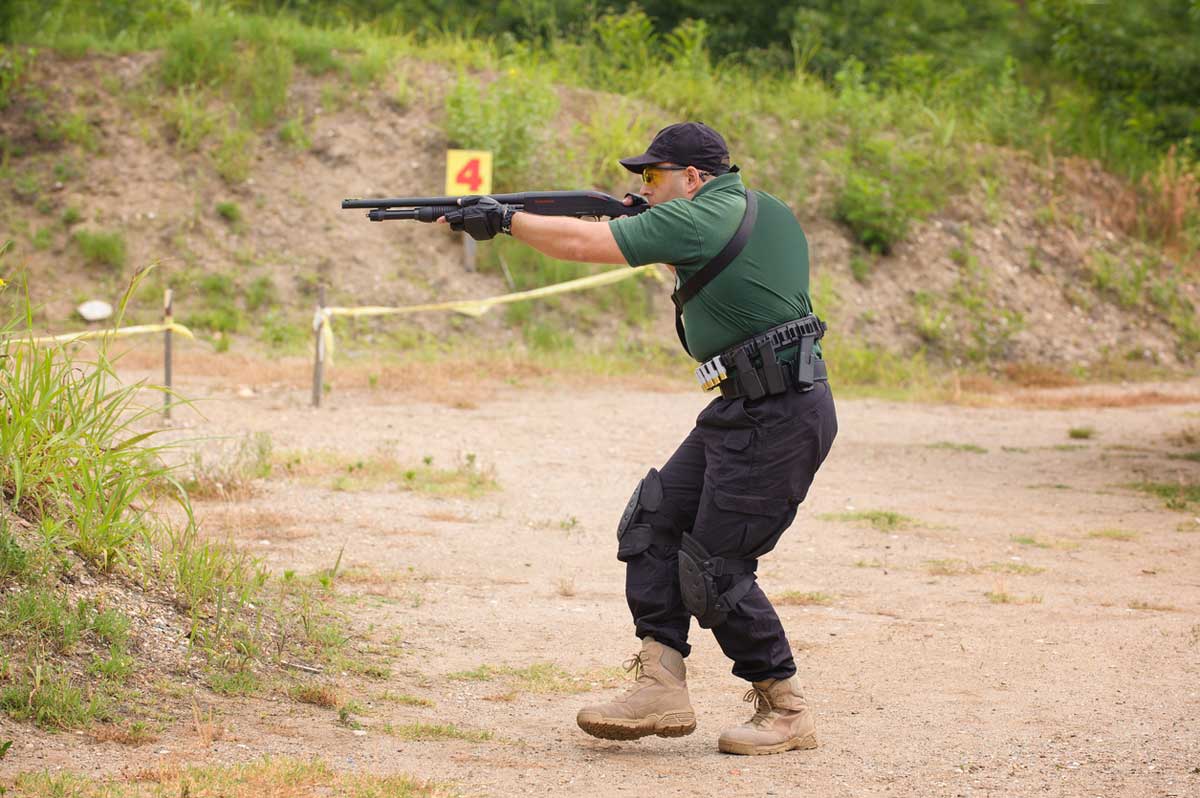 One of the most daunting things I realized when I first started writing gun and ammo reviews is that there wasn’t enough information on the best guns on the market. So, I decided to share my recommendations based on what I had learned over the years. And that’s how this site came to being. Four years later and we have written plenty of meaningful reviews and articles about guns that gun enthusiasts will benefit from. But, enough about that, let’s talk about the Mossberg 590A1.

I’ll be covering a brief description of what the Mossberg 590a1 12 Gauge Pump Action Tactical Shotgun is and the promise that it makes. Then, I’ll follow it up with the features and benefits you stand to relish and things you need to consider before making a purchase decision. Finally, I’ll cover its pros and cons and general user impressions of the product before giving you my final thoughts. Sounds good?

Things to Consider Before Buying a Tactical Defense Shotgun

At the moment, I have a safe full of handguns. And a dozen other different rifles that I like to try out at the gun range. However, it’s the tactical shotgun that I keep close by.

Why? Because it is the most effective when it comes to home defense.

But the truth is, perusing the market for a suitable shotgun can be a monumental task. So, to help you find the right rifle for your needs, we have covered some common features you should be on the lookout for. Of course, there are a gazillion other things to consider…but the ones I have mentioned are by far the most important. Here’s a deep dive into the individual factors.

An essential consideration for first-time users, in particular, is ease of use. Many tactical guns require a bit of training before the owner can get thoroughly acquainted. On the other hand, others are not designed with beginners in mind. So, they may require advanced training before they are user ready.

One major concern about tactical shotguns is safety. Therefore, when choosing a tactical rifle, you should carefully inspect the safety measures provided by the manufacturer. Also, new users must learn all the rules and regulations of gun use before using one. And, of course, you should not leave your gun lying around. Instead, you should keep it out of sight and out of reach so that no one accidentally harms themselves.

A great quality shotgun like the Daniel Defense AR-15 and Benelli M4 can cost as much as $1700. But guns with fewer special features cost between $500 and $700. At the opposite end of the spectrum, lower end shotguns cost between $300 and $200. That said, the adage is true. You get what you pay for. If you invest in a quality shotgun, you’ll enjoy better performance, better quality barrel, improved features, and reliability.

Most encounters happen in stressful conditions. Plus, there’s almost always a probability that most of them will happen in the wee hours of the night. And since it’s too dark to see properly, you’d have to shoot based on your instincts which means there’s a pretty good chance you’ll miss your target. So, we recommend getting a shotgun that has all the necessary accessories to help you verify your target. Additionally, it is always good to use reliable ammo that will not let you down in any situation.

Everyone and their mom has heard about the Mossberg 590a1 12 Gauge Pump Action Tactical Shotgun. It is a badass combat shotgun built upon the standard Mossberg 500 receiver. It claims to be built for the dangers involved in military life and, therefore, makes a suitable companion for home defense and law enforcement.

Being long in the line of other 590 models, Mossberg put it through some well-needed iterations to make it better than its predecessors. And it seems like the major iterations are better corrosion resistance, greater ammunition capacity, and better durability. Also, the Mossberg 590a1 is outfitted with heavy walled barrels and aluminum trigger guard and safety buttons.

In terms of use, the Mossberg 590a1 12 Gauge Pump Action Tactical Shotgun can be of help if you’re looking for an effective weapon to help protect your family. It also turns out that it is the duty weapon of choice for law enforcement and military agencies.

Here, I’ll go over the features of the Mossberg 590a1 Tactical Shotgun and the benefits that come with having those features.

The Mossberg 590a1 has remarkably thick-walled barrels. This is awesome because thick-walled barrels add strength to the gun. Plus, it also means that the barrels would be able to stand up to continuous abuse without denting. This is something that is super important especially considering it is built to military specifications.

This gun has innovative ghost ring sights that help you to acquire a target even under stressful conditions easily. The large ghost ring rear provides a better view of targets downrange while the front sight makes target acquisition a lot faster.

If you don’t like the ghost ring feature, there is a three-dot high visibility feature to help you acquire the target. However, it is essential to bear in mind that the three-dot feature offers fewer optics which means that it is not an option when your life is on the line.

The Mossberg 590a1 has a lightweight synthetic stock that reduces the overall weight without compromising durability and strength. The same stock also comes with a spring activated storage system which allows for easy loading of rifles.

One interesting feature about the Mossberg 590a1 is the finish. Even though it is made of steel which easily corrodes, it is reinforced with a parkerized finish which helps protect the steel surface from wear and tear and corrosion.  The fact that it is parkerized makes it more forbearing.

For those who are in the beginner stage, handling a rifle can seem like a monumental task. Luckily, the Mossberg 590a1 12 Gauge Pump Action Tactical Shotgun is topped with tang safety which provides a visual and tactile indicator of the shotgun’s readiness.

Here’s a video summarizing the features:

Phew… we are done with the features and benefits of the Mossberg 590a1 Tactical Shotgun. Now, it’s time to look at the pros and cons of the shotgun and the general user impressions of the product. 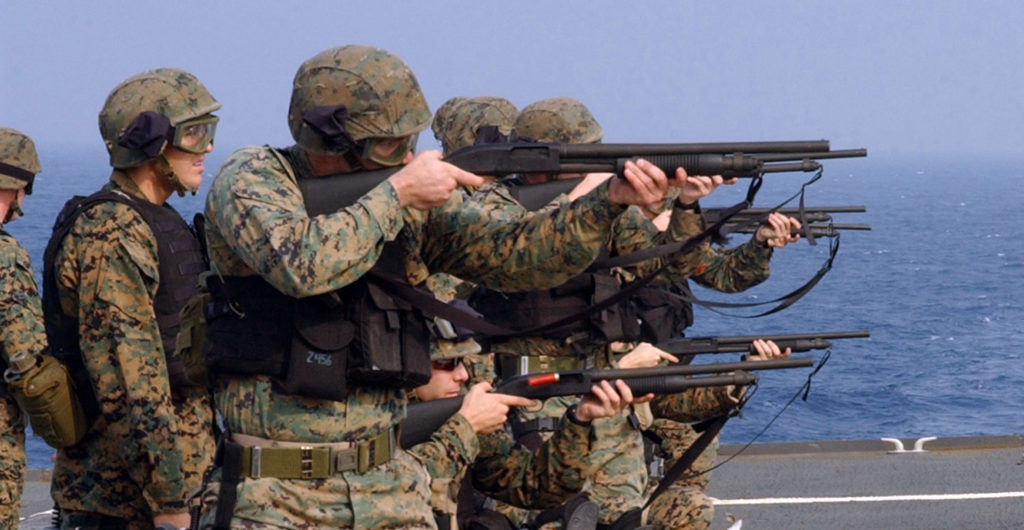 Based on user impressions, the Mossberg 590a1 Tactical Shotgun is right off the bat one of the best shotguns on the market. For starters, it is a reliable all-around heavy-duty shotgun that’s both functional and aesthetically appealing. The stock also has a squishy rubber pad that’s way better than the one on the Mossberg 500. Plus, it’s ready to use right of the box.

Check out our reviews of another pump action shotgun, the Remington 870 and the good ol’ Browning BPS.

On average, the Mossberg 590a1 Tactical Shotgun costs slightly higher than what most of us would want to spend on a firearm. But I believe that it still offers excellent value for the money, especially since it includes ghost optics which help provide a better range and faster target acquisition. As far as home defense goes, it may be a bit too long for some users, and in that case, it might be better to go for the Mossberg 590-Shockwave, which is significantly shorter and lighter.

Q: What does the term “parkerized finish” mean?

A: Well, it is merely a technique used to protect the steel surface of a shotgun from corrosion and wear and tear.

Q: Why is a shotgun more preferable for home defense?

A: By its very nature, a shotgun spreads pellets of bullets out over a large area; therefore, significantly increasing the odds of hitting the target.

A: It all depends on your preference. But optics are primarily used to help you better aim at the target.

Q: Can I use my Mossberg 590a1 tactical shotgun against a wild animal?

A: Yes, you could use a tactical shotgun to fend off an animal attack.

There you have it! An unbiased review of the Mossberg 590a1 Tactical Shotgun.

Purely intended for home defense and law enforcement, the Mossberg 590a1 Shotgun provides the user with a lifetime of satisfaction. It also proves effective when you’re in stressful conditions because it has powerful optics that offer a better view of the target as well as better and faster target acquisition.

I know we’ve gone through a lot and your journey to getting a Mossberg 590a1 12 Gauge Pump Action Tactical Shotgun has just begun. So, think of all the factors you need to consider and the pros and cons and determine whether it’s what you are looking for. Click here to check out the Mossberg 590a1 Tactical Shotgun.